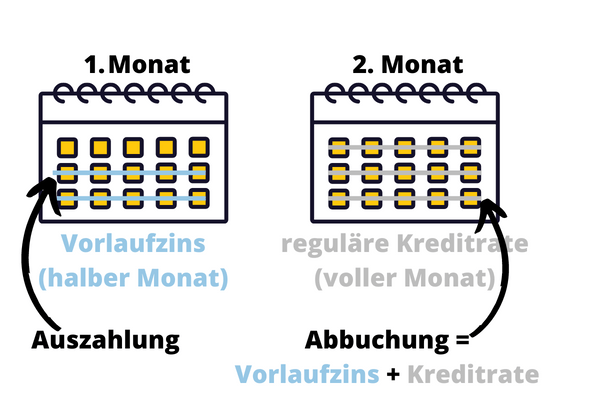 at credits and loans there is no avoiding the subject of interest rates. Interest rates come in many forms. After all, interest is a bank's most important source of income. In the case of advance interest, the bank charges the agreed interest rate for a loan paid out earlier. However, since advance interest is not included in the installment plan due to the earlier payment, it sometimes makes borrowers feel uncomfortable.

Already knew? – In fact, interest on loans is the only fee allowed by law, which is why serious loans without Schufa have to make do without any upfront costs

What is advance interest?

When redeeming one installment loan Each installment contains the interest for one month, which always has 30 days at banks. If the first installment is collected later than 30 days, the period exceeding 30 days will fall. advance interest on. The interest rate of the advance interest corresponds to the agreed rate borrowing rate. Thus become no additional fees due, since the borrower has borrowed the money for a longer period of time.

Preliminary interest is charged by banks if the borrower receives a loan before it is scheduled to begin at the beginning of the month. Since the advance interest corresponds to the loan interest, you have no disadvantage from it. Although you pay more interest overall due to the longer term, you also have the loan for longer.

Upfront interest is often incurred when a loan is paid off in the middle of the month. Because banks often do not debit the first installment at the beginning of the following month. Instead, the debit usually takes place a month later. If the loan is paid out in the middle of a month, i.e. about 6 weeks after the payment.

Advance interest is not to be confused with…

Prepayments are the opposite of Commitment interest, which one mainly from construction financing knows. With the commitment interest, the bank charges a fee for having reserved the money for you and not paying it out until a later date than planned. On the other hand, the advance interest is an interest that has to be paid due to the earlier payment of the loan.

Prepayments are also not included advance interest to confuse. This means fees for accounts. The bank charges interest on the advance if the cash account or fixed-term deposit account is closed prematurely. 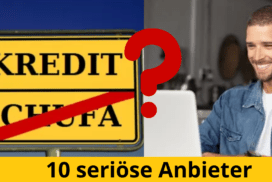 My name is Sascha, I was born in 1988 and founder and operator of the site Konto-Kredit-Vergleich.de I'm an engineer by profession, but I already had a soft spot for finance when I was a kid. My parents told me at the time that I should become a businessman, but somehow I decided to study mechanical engineering.

Nevertheless, I like to analyze, compare and optimize all kinds of things for a living. But especially financial products.

Combined with my affinity for websites and the online world, this led to 2018's Finance blog Konto-Kredit-Vergleich.com online.

Because it has always bothered me to pay money for a Girokonto. And so the blog started 2018 as a comparison site for free checking accounts and cheap depots. Gradually, articles about financing came through credits which is now used by several hundred readers every day to cover Credit needs in difficult cases help

In addition, there are on Konto-Kredit-Vergleich.de some special comparisons, which did not exist in this presentation before. For example you can find in the section P account you a comparison of the best garnishment protection accounts, which you should read, if you before the decision What bank for a P-Konto stand. But also in the section automobile you will find many useful tips if you want to finance or lease a vehicle. For example, in the article on the Buy a car on installments despite negative credit bureau found that many offers with a more favorable Credit despite negative credit bureau cannot keep up. Although, of course, these loans are not cheap either, because a negative Schufa entry always drives up the costs drastically.

Quickly the cookies and let's go 🍪
👋 Also Konto-Kredit-Vergleich.com uses cookies, which you can manage via this banner. Cookies allow us to optimize our offer, because we can see better what you like and what not.
You may refuse cookies that are used to create such Statistics and to the Marketing of our contents serve deselectso that they are not set.
Functional cookies on the other hand are necessary, so that Konto-Kredit-Vergleich.de works. Therefore, functional cookies can not be deselected.
In addition you can find under the following link the Imprint and privacy policy. Furthermore you can download here our Cookie policy if you want to learn more about the cookies used on Konto-Kredit-Vergleich.com.